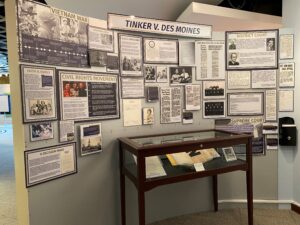 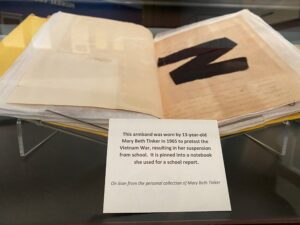 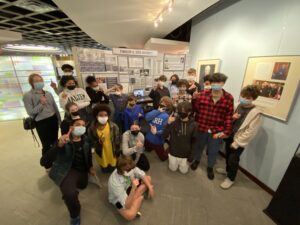 The Judicial Learning Center in St. Louis is proud to display Mary Beth Tinker’s original black armband from 1965, on loan from her personal collection. The armband is surrounded by an educational exhibit explaining the historical context of the time, the story of the students’ action, and the resulting landmark U.S. Supreme Court case.

In 1965, several students in Des Moines, Iowa, wore black armbands to school to protest the Vietnam War and to honor the dead on both sides. When suspended, the students and their families brought a federal lawsuit against the school district. The case moved through the court system, including two stops before the Eighth Circuit U.S. Court of Appeals in St. Louis. In the 1969 ruling in favor of the students, the U.S. Supreme Court stated that public school students and teachers do not shed their First Amendment rights at the schoolhouse gate.

According to the First Amendment Center in Washington, D.C., this landmark ruling set the standard for when public schools may or may not censor student expression. The precedent set in Tinker continues to be cited in First Amendment cases, including the recent student speech case decided by the U.S. Supreme Court, Mahanoy Area School District v. B.L., involving a Pennsylvania high school cheerleader’s infamous Snapchat posts.

Click on the following links to explore the exhibit panels:

Click on the image below to see the contents of the armband display case:

This armband was worn by 13-year-old Mary Beth Tinker in 1965 to protest the Vietnam War, resulting in her suspension from school. It is pinned into a notebook she used for a school report.